You may find yourself often burning out during the day, and resorting to coffee, tea, or an energy drink to get the extra energy boost you need to get things done. Remember, however, that for every caffeine high there is a caffeine crash: caffeine is addictive, and like any addictive substance it has withdrawal symptoms. The symptoms of caffeine withdrawal include: headaches, irritableness, confusion or inability to concentrate, inability to sleep, drowsiness, stomach pain, and pain in the upper body and joints. In other words, your consumption of caffeine might be the cause as much as it is the solution to your mid-day burnouts. 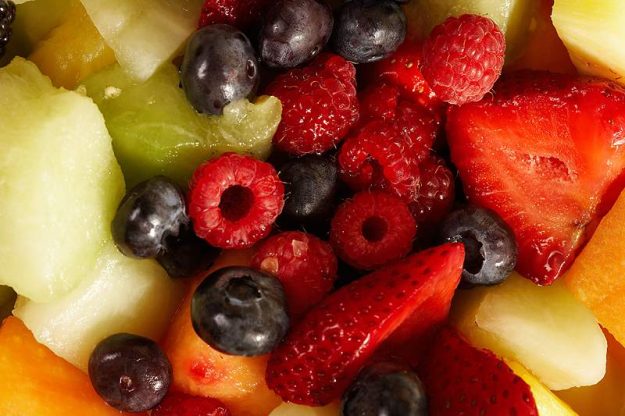 So, if caffeine seems to be getting you down as much as it is getting you up, you may want to consider that fact that there are a number of food which can boost your energy levels – and without any resulting crash (or without any risk of addiction, for that matter).

Blueberries, on top of being jam packed with antioxidants, are high in fiber – so your body needs to kick things up a notch to digest them. The fiber in blueberries also helps you to stay feeling full and satisfied for longer (and consequently not feeling hungry, grumpy, and tired).

Carbs are your body’s main source of fuel (although they have been under attack by certain diet regimes of late). Unlike sugary food or drinks which cause spikes in insulin (as well as energy) levels, whole grain food like whole-wheat bread, brown rice, or whole grain cereals take a long time to break down in the stomach, which keeps stable one’s blood sugar and energy levels (avoiding the drops in energy which follow upon the spikes).

These nuts, on top of being high in protein (something that, like fiber, kicks your metabolism up a notch and gives you more energy), are all high in magnesium. Magnesium has the amazing ability of converting sugar into energy, and studies have shown that magnesium deficiency can result in decreased levels of energy (although, I think this is true of any nutrient deficiency, since they can cause your metabolism –and along with it, you – to get sluggish and slow. Still, making sure you get enough magnesium – as well as other essential vitamins and nutrients – is a good way to keep your energy levels from crashing).

Lean meats such as lean beef, lean pork, skinless chicken, and turkey, in addition to being good source of protein (which is good for your energy); include something called tyrosine which boosts certain brain chemicals that make you feel more alert, as well as more focused. Additionally, the Vitamin B-12 contained in these meats is considered as a cure for insomnia – something that could very well contribute to your daily energy levels. Getting a good night sleep is, quite obviously, important for maintaining healthy energy levels during the day – so any food which help with your sleeping habits are going to be a boon, indirectly, to benefit your energy levels as well.

The omega-3 fatty acids found, among other things but perhaps most deliciously, in salmon are rumored to combat depression – and considering that your mood and energy level often run hand in hand (happiness almost always equals high energy, as feeling down and depressed is normally the companion of drowsiness or lack of energy) then eating your depression away could be a good way to maintain your daily energy supply.

Leafy greens such as lettuce, spinach, kale, mustard greens, or watercress (along with other types of food such as legumes, nuts, and citrus fruits) are high in a nutrient called folate. Folate, like the omega-3 fatty acids found in salmon, are thought to reduce the risk of depression, which is also a factor in your energy levels (see above).

Eating food that are high in fiber such as beans, whole fruits, vegetables, and whole grain breads and cereals can help your body to maintain stable energy levels all day long. Because food high in fiber take a long time to digest, this means that they provide you with a slower and steadier supply of energy throughout the day, as opposed to the quick up and down spikes in energy brought on by caffeine or sugary drinks.

Not a food you say? You are right, but perhaps nothing makes you drowsy quite like being dehydrated. Dehydration slows down your metabolism – and since the workings of your metabolism and your energy levels go hand in hand, you know what that means. On top of that, filling up on water will make it less likely that you will attempt to refresh yourself with a sugary drink that will spike, only to later crash, your energy level.

These food are another way to get your water, in case “drinking” is not your style. But don’t just get your fruit from a can or in jams or something – eat the whole fruit or vegetable; that’s where the water is. Other food that absorb a lot of water when cooked are oatmeal and pasta.

10.) Breakfast: Do not skip breakfast

Studies have shown that skipping breakfast has the effect of lowering your metabolism; something which, we have seen, also lowers your energy level. Erratic meals, like a dose of sugar, cause a spike in energy that ultimately leads to a crash. Keep your meals regular (which means: eat breakfast) so that your metabolism will stay even and stable throughout the day, providing you with regular energy instead of sudden spikes and drops.

By eating the same amount of food, only spread out over 4-5 meals a day instead of 3, you can even further embrace the principle stated above; namely, that giving your body a steady and regular supply of food, rather than rare and sudden bursts of it, allows your metabolism to run more smoothly, thereby maintaining stable energy levels.

This point cannot be stressed enough. Although it might seem like a good idea to drink a can of coke for an energy boost, ultimately all you are going to do is make yourself even more sleepy; while it’s true that, a high dose of sugar (did you now that a can of coke has something like 10 tablespoons of sugar?!) will give you a boost of short-term energy, but it will eventually lead to a crash. You’ve read the tortoise and the hare haven’t you? Stick with slow and steady: eat more fiber.

Oranges, on top of being jam packed with Vitamin C, increase your iron absorption. This is important for energy because a deficiency in any essential vitamin or nutrient (the most common one of which is probably iron) causes your metabolism to slow down which in turn causes you to have less energy.

One word: Popeye. Actually, the logic behind Popeye’s strength boost prior to eating spinach was that spinach is high in iron. Apparently there is some controversy among researchers about whether or not spinach really does make you stronger – I’m glad that science is directing its attention to Popeye research – but either way, Spinach is very good for you, and at the very least makes this list of energy food for being a leafy green vegetable with folate.

Maybe Popeye made the wrong choice after all (although I hesitate to say anything negative about Popeye). The monounsaturated fat found in olive oil apparently prevents the breakdown of muscle by lowering levels of a cellular protein known as tumor necrosis factor-a, something that is also related to weakness. Perhaps, to be more fair to Popeye, he should have glugged some olive oil to lower weakness prior to eating his spinach for his muscles (I would hate to take his spinach away from him).
So there you have it. Any of these food, or any of these diet or lifestyle tips present an alternative method of gaining energy during than day other than caffeine: something that will ultimately leave you feeling tired again. And if you manage to harness the power of a steady metabolism, you may not ever need a boost to begin with: what’s better than a mid-day energy boost to get your day over and done with, than a steady level of energy all day long. And this just might lead towards days that are not simply something to get over and done with, but which are appreciated and lived for their own sake.