×
Home » Food & Cooking » How To Eat Healthy, And Save Money At The Same Time

Some people think that eating cheap means resorting to macaroni and cheese dinners - but it doesn't necessarily have to. If you're willing to be creative, on top of crunching some numbers, there are a ton of meals you can come up with that are delicious, healthy, and cheap. To get the ball rolling, here are some ideas about how you can stay healthy while saving money (and all the while, still taking pleasure in your meals): 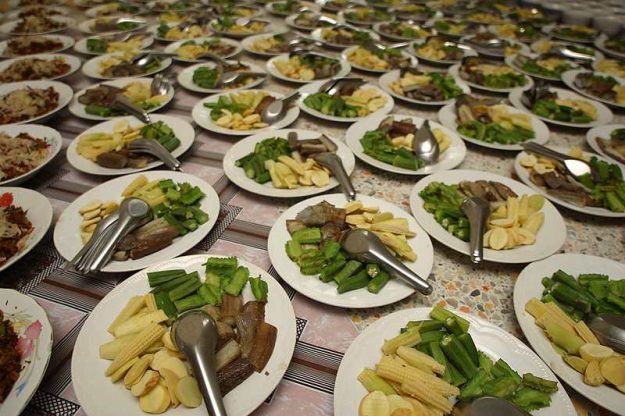 Rolled oats, even organic ones, are super cheap. In my household, a $6 bag of organic rolled oats makes a whole week of breakfasts for two people (that comes out to about 40 cents each per meal. Add some nuts and seeds (go heavier on the sunflower seeds than the pumpkin seeds and almonds, which are more expensive) yogurt, milk, cinnamon, a little honey or even cocoa powder to make it more delicious. Its true that most of these ingredients are not as cheap as oatmeal, but since they are not the main part of the meal, you aren't going to be using much of them per meal, which means that, spread over time, these extra ingredients are not going to cost you all that much either.

This is one of my favorite meals: it's delicious, healthy and costs next to nothing. A $5-$6 bag of rice, plus $3-$4 worth of beans will make enough lunches for two people for a week (which comes out to about 60-70 cents per meal per person). Add as much onion and garlic as you want, since it's delicious, healthy, and also costs next to nothing. Add a little bell pepper, or whatever other vegetable you want to throw into the mix. Spices, too, are cheap and healthy, and can be added to the mix as a whole, or to individual servings for the sake of variety. Finally, add a little sauce to it, like sushi su (vinegar, sugar, and salt) or sweet chili sauce (vinegar, sugar, sweet chilies) - both are easy to make and the ingredients are not expensive. In my household, this meal gets eaten for lunch every day. You may want more variety than that, but the more you can eat this meal the better it will be for your wallet (and without sacrificing either health or deliciousness). For even more variety, change the type of beans you use from week to week, or try lentils, chickpeas, or any other type of legume instead.

Pita bread is delicious, healthy and incredibly versatile - and on top of all that, it is unbelievably cheap. I buy mine from a local Middle-Eastern bakery where they make their own (without any preservatives: just flour, water, yeast, and salt). 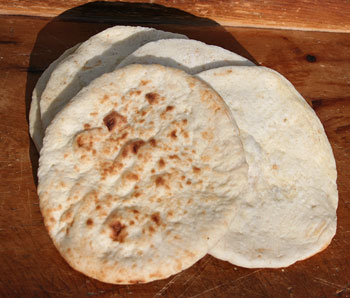 They charge $1.75 for a bag of 6 large pitas; which comes out to a little less than 30 cents per pita, each of which has 12 grams of protein, 10 grams of fiber, 8% of your daily calcium, 16% of your daily iron, and only 1 gram of fat. One pita like this is more than enough to fill you up if you need a quick snack which costs next to nothing. They can also be used as wraps for sandwiches, as pizza crusts (the edge of the pita, or the "pizza crust" will get super crispy and delicious in the oven), or you can cut them up into triangles, put them in the oven for ten minutes, and eat them like chips.

For an example, here is a recipe for a pizza using pita bread as a crust that is delicious, healthy, and super cheap:

Bake or boil the sweet potato until it is soft enough to mash with a fork, then do so. Next spread the sweet potato over the pita, leaving some space around the edge to be like the crust. Add the tomato slices and the kale (you can embed the kale right into the sweet potato so it doesn't slide off). Then sprinkle whatever spices you want. I like to sprinkle the spices along the "crust" to make it even more delicious.

Bake it for about 10 minutes at 350 C. I usually take the top oven rack right out and put it on the counter, then put the pita on it and make it right on the rack - it makes it easier to get in the oven and there's no risk of tearing it. The kale, along with the crust, gets super crispy and delicious (it's awesome).

Now, for the cost breakdown: the sweet potato will probably cost about $1; the pita, as we said, about 30 cents; the tomato maybe $1.50; the two leave of kale maybe 40 cents; the spices negligible. That makes this pizza cost you about $3.20, and it should feed two people (so $1.60 each). If that's not enough food for two of you, you can just make a second one (you can afford it), or double up the pitas, and put something in between to make it stick together like an avocado (I've done it, it's really delicious). With the second pita (30 cents) and the avocado (around $1.50) that makes your double pizza cost around $5.00 (or $2.50 per person).

This is probably not the most authentic Indian cuisine there is, but I find it super delicious (and it's definitely cheap and healthy). 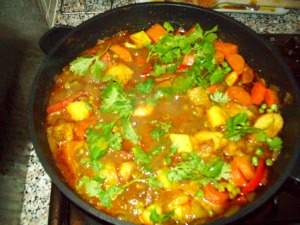 Half a brick of tofu, cut into small cubes (or whatever way you want to cut them)
1 cup of plain yogurt
1/2 cup of milk, or almond milk
1 or 2 onions (depending on how much you like onion), chopped
1/2 to a whole head of garlic (again, depending on how much you like it), chopped
Some bell pepper, or whatever other vegetable you want to add.
Spices: Curry powder, turmeric, or garam masala (or some combination of them) are all awesome for curry. Paprika and or cumin on top of those is also delicious. Add cayenne or chili pepper to spice it up if you want.

Cook the onion and garlic for as long as you want (depending on how strong you want them to be) in a large/deep frying pan or in the bottom of a pot. Add the spices, milk, and yogurt, then stir it all up. You might want more or less yogurt or milk depending on how thick you want it (but don't skimp on the spices no matter what). Add the other vegetables, and the tofu; let it cook long enough for the tofu and vegetables to get nice and spice-ified, and for the sauce to thicken to your liking.

So there you have it. Eating healthy and delicious food need no longer be expensive; with some careful planning and some creativity, you can make awesome, healthy meals for next to nothing. Keep in mind though: some of the ingredients mentioned above are not, in themselves, cheap. If you're not already in the habit of doing your own cooking, it could take a fairly sizable grocery investment to get yourself started - but in the long run, it will be worth it. Think of it this way, the more you spend on groceries, the less likely you will be to eat out - which will be way, way cheaper in the long run.

Which brings us to our last point: never, never, ever eat out; don't even buy a muffin. Preparing all of your own meals and snacks is the single best way to save money and eat healthier. Of course, if you can afford it, you can eat out for fun sometimes - but if your goal is to either save money or eat healthier (or both at once) then there is nothing more important than this maxim: prepare every single thing you eat or drink yourself. That way you can keep track of exactly what you are consuming (not to mention exactly what the ingredients of what you are consuming actually cost).