×
Home » Health » Wellness » Different types of yoga and their benefits

For the beginner, walking into a yoga studio for the first time and glancing at the schedule of classes offered can be intimidating. If there was ever a time when there was such a thing simply as "yoga" - those days are long gone. "Power yoga", "yin yoga", Bikram yoga"; what on earth is the difference, and what are the benefits of each? Here is a list of some of the most popular styles of yoga, along with their benefits, for the beginner who knows little about yoga or which particular style is best for them. 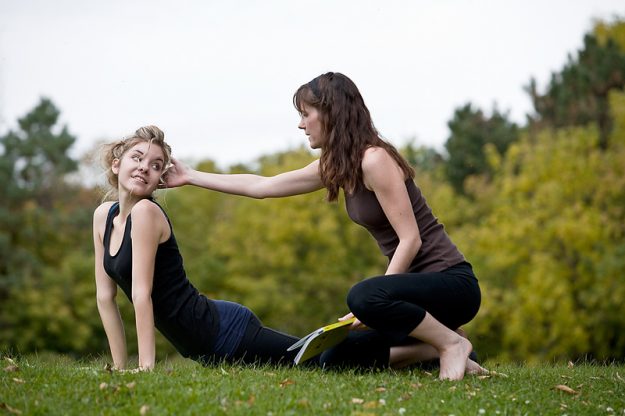 1.) Power yoga - If you're looking for a workout with your yoga, than this style is your best bet. This fast-paced, high-energy style of yoga combines movement with breath, and is often done in a heated room (which heightens the intensity even more). The benefit of Power yoga is that you can combine your yoga and your workout into one, since Power yoga is both a cardio and muscle building workout.

2.) Yin Yoga - This style of yoga is basically the opposite of Power yoga. It consists of long, deep stretches held for 3 to 5 minutes, which serve to open up your connective tissues - since connective tissues are not as elastic as muscles, you need to hold the poses longer in order to release the tension in them. The benefits of Yin yoga are that it is more of a relaxing, meditative style of yoga (they say it is supposed to "turn you inward") as opposed to power, and it is usually done at room temperature if you're not into the high-intensity of a heated room.

3.) Bikram Yoga - This style of yoga is done in very hot room, and follows a very specific set of poses. Any studio, anywhere in the world will always follow the same series of poses. It is a very formulaic, and some would even say militant, style of yoga. The benefits of Bikram yoga are that you always know what to expect (no matter which studio you do it at), and you can get very good at the poses by doing them over and over again. Bikram people say that the poses don't change, but instead you change doing the poses; in other words, you can do them better and get more out of them.

4.) Moksha Yoga- This style of yoga was inspired by Bikram yoga, but is less intense, and more accessible to beginners. You may also find more variety in Moksha, as it tends not to be quite as formulaic as Bikram. Otherwise, the same holds for Moksha as above.

5.) Iyengar Yoga- This style of yoga was developed by B.K.S. Iyengar, and is very alignment focused. Each pose is looked at individually rather than being connected together; for example, whereas power yoga is all about flowing right from one pose into the next, in Iyengar each pose is focused on individually, and you stop to talk about it before moving on to the next pose. Iyengar yoga is very slow, and uses a lot of props like blocks, bolsters and straps. The benefits of this style of yoga are that it is good for beginners to learn poses properly, and even good for advanced students who haven't learned their alignment properly.

6.) Restorative Yoga - This style of yoga is even more relaxing, and even less intense than Yin Yoga. The difference is that you are not looking for a stretching sensation as with Yin, but instead you are just putting yourself into "restorative" poses and holding them for a very long time. The benefits of this style are similar to those of Yin yoga: it is more about relaxation and meditation that about getting a workout, only to an even greater degree than with Yin.

7.) Kundalini Yoga- This one is a complete mystery to those outside it's cult. It has something to do with "energy snakes" and wearing turbans to keep them from escaping your body. It's pretty freaky; I'd stay away from it.

8.) Yin Yang yoga - Many studios don't offer classes in this type of yoga; it's basically a combination of Power yoga and Yin yoga. It begins with a more high intensity style of yoga, and is followed by more relaxed stretching meditative type poses. The benefits of this style of yoga are that if you like both the exercise and the relaxation sides of yoga, you can get both all rolled into one.

9.) Core yoga - These classes vary from studio to studio, and you can't really do a teacher training in this. Core classes generally focus on the core muscle groups like abs, obliques, glutes, back, and hip flexors. Benefits: good stomach/core workout - a strong core improves posture, balance, and can help relieve back pain, and bring more power to arm and leg movements which stem from the core, so it's good for athletes.

10.) Hatha yoga - A broad term, covering man styles of yoga; you'll see it on the schedule of every yoga studio. It is generally more slow-paced than Power classes, but the specifics beyond that really depend on the studio. Hatha means "moving" - so it pretty much covers any style of yoga involving physical postures. There are other types of yoga (that people here don't really know about) that doesn't involve physical movement - but since everything that is normally considered "yoga" in North America does involve movement or physical poses, Hatha yoga basically just means "yoga". The benefits of this style of yoga is that you never know what you're going to get, so it could be a good way to introduce yourself to all different types of poses if you are a beginner.

11.) Acro yoga- Short for acrobatic. It is done with partners. It is not usually offered as a regular class, but you might see it for a special workshop (especially for valentines day since it's yoga for partners). You can also go to a specific studio for it (but they're pretty rare). Generally one person is the base; they lie on their back and extend their legs and arms up to the ceiling, and the person on top rests on their feet and hands, moving into various positions. The benefits: it's fun, playful, and can build trust and communication between couples.

12.) Budokon Yoga- This is a combination of yoga and martial arts. It has belts like in martial arts, and involves sparring for more advanced students. It is quite physical, and is done by Jennifer Aniston, and other celebrities. It's also hard to find, not all studios have it (most don't). Benefits: you get the benefits of martial arts along with your yoga.

13.) Suspension Yoga - Also called "anti-gravity" yoga. It involves hanging from the ceiling, and helps to lengthen your body. These poses in this type of yoga make use of gravity in addition to your own body weight. Benefits: it is fun and athletic, and the lengthening part is supposed to be good for you (think inversion machines meant to lengthen your spine).

In case you know nothing of yoga, or it's various styles, this list should get you pointed in the right direction; namely, towards the style of yoga that's most up your alley. Be advised, however, that every yoga studio has something of a cult about it. Also avoid the expensive vitamin water and other gaudy merchandise. Other than that, enjoy yourself! Yoga is a very good way to relax or get exercise!