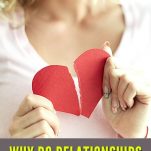 Many people think that the first 1-2 year of a relationship is the easiest because there are still many new things to learn and experience with each other. Perhaps this is the time when love burns most intensely.

Many people also claim that the first two years are one of the most difficult stages of being together.

According to one study, 70% of relationships that don't end in marriage break up before the first anniversary. The same study found that couples only have about a 20% chance of going their separate ways after five years, and that rate only decreases year over year.

But what exactly are the factors that make the first year together so difficult?

Here is why relationships fail after 1- 2 years.

1. Fragments from the previous relationship

These often weigh heavily on a new relationship. Comparisons with the previous relationship are not easy to avoid, and there is a good chance that you risk breaking up your current relationship.

Related: Does my ex miss me?

In the beginning, both partners go to great lengths to move the relationship forward as best they can. However, sooner or later, even after a few months, both parties' masks fall and they are forced to show their true and perhaps not always positive side.

Of course, it's difficult to mentally prepare for this, but even in the midst of the greatest love, it's important to be aware that no one is perfect. Of course, that doesn't mean that every flaw or bad habit has to be tolerated.

3. You will need to accept each other's opinions

Sometimes your opinions aren't the same, and it's easy to get into a heated argument when you're standing up for what you think is right. However, at some point, someone has to give in or come to their senses, which can lead to further tension.

Although there are relationships where there is clearly a hierarchy between the parties, it is healthier to see your relationship as one where you are equals, but in some situations decisions have to be made, and if you are unable to compromise early on in the relationship there is a very good chance that you will part ways.

4. You start to see each other's imperfections

When you are in the initial, unclouded phase, you may tend to overlook each other's flaws. However, as your relationship progresses, sooner or later all the quirks and annoying habits that were previously hidden will come out.

As mentioned above, you can mentally prepare yourself for this, but it can be a really serious problem if you're going to act completely differently for the sake of the relationship at first.

Remember that it's only worth getting involved in a relationship if you really feel that you don't have to play a role alongside your partner. This will greatly reduce the risk of disappointing yourself and your new partner.

The "honeymoon phase" of a relationship usually ends within the first year, which can be so disheartening for new lovers that they tend to question the viability and functionality of the entire relationship.

This is a natural process, the beginning can be very intense and the boring days of the week can be shockingly dull after the initial fireworks. But you should know that the fireworks are only magical because they are rare, if they were every day you would get bored of them.

A relationship is also work, a joint effort that holds many more fireworks later, but it also needs quieter periods.

Related: When he ignores you

6. Fear and uncertainty about the future of your relationship

As the first year draws to a close, most people have a clear idea of where their relationship is going and whether they can envision a future with their current partner.

The idea of moving in together, getting married, and having children in the future can come up, but since these are sensitive topics, they can also be a source of serious concern.

Short-term goals are the same, but long-term ideas can be very different, which can be a source of serious tension, and only those couples who are willing to work together can really overcome this.

For the best chances to save a relationship, it requires an honest discussion and consideration. Speak to your partner openly about your long-term goals to see how they match up. Working together should be one of the top priorities to ensure that you're both on the same page and understand where the other person is coming from.

After the "honeymoon phase," the first serious disagreement is almost bound to happen, and often many more will follow. The first difficulties can sometimes create a real sense of doom and gloom, as you may find your relationship very fragile.

8. Differing opinions and beliefs come to the surface

The only way to really get to know each other is to spend a lot of time together. It's impossible to learn everything about each other and work out the disturbing factors in each other's thinking in the first few months, but if these come to the surface, your whole relationship can be questioned.

To avoid this, ask questions in the dating phase about things that you know are clearly disqualifying reasons for a long-term relationship.

9. Family and friends come into play

In the first few months, many couples treat their relationship as an isolated island and in countless situations, it's just the two of them. However, as time goes on, you need to develop a balanced relationship with family members and friends on both sides, which doesn't always go so smoothly.

The key to dealing with this is to be yourself. When he sees how connected you are to your family and how important your friendships are to you, conflicts can be reduced.

After a while, many couples get so used to the relationship that they just get too comfortable. It then becomes not about impressing the other person, but just about your own comfort, and this can often be a downer.

Always remember that the relationship between the two of you will be what you make of it. Your relationship is a garden that you grow together. Don't delude yourself into thinking that it will always be there and that you have nothing to do with it.