×
Home » Love & Relationship » 8 Signs That He Loves The Other Woman 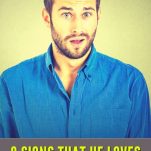 We all love the thrill that a healthy relationship brings to our lives. A committed relationship brings more than just joy to tranquility and peace to women to bring out the nurturing nature every woman possesses. However, a woman's greatest nightmare is having her relationship struck by reasons to believe that her man has another 'special' woman out there.

Related: True signs he loves you

While this might feel quite traumatizing, scaring and quite lonely, more women have experienced it more often than you might think. While such suspicion and uncertainty might be painful, they offer women a chance to reevaluate the real worth of the relationship and realize their position they hold in a man's heart.

What are the Signs That He Loves The Other Woman

The top 8 signs that he loves the other woman are as follows:

1. Your Man Gets Defensive Quite Easy

Human psychological nature has time to time proven that mischief creates a guilty conscience. Similarly, when a man has a fling to keep on the low, even the most innocent questions are perceived to be an accusation. As a result, the man might react to the impulse by railing against the questions.

Even simple questions like his plans after work, why he has had late nights from work, or what friend he might have met over a game night at the country club might have him act defensively. To be quite sure, you might need to ensure that your tone doesn't portray any accusation. Instead, slide in the questions in a natural curious way while maintaining a conversational tone.

After all, you wish to assume that you are spreading the affectionate care by asking about little matters that his day might have entailed. A faithful man with nothing to hide will have an open and honest approach to the questions answering them imminently without a complaint.

However, if your man has his conscience guilty, he will approach the questions quite aggressively and irritated, having him think you're playing some mind game on him.

2. Romance is Dead from his End

Romance is the fuel to a relationship, and without it, things can go quite sour especially for a young couple who share a bed. After all, we all have quite some desire and affinity towards intimacy, especially from the person we love. However, as hard as it is to take in, lack of romance from the guy might mean that he is getting nasty with some other woman out there.

A drop in the affection towards you by the man might also communicate volumes of his probable mischief outside the relationship.

Normally, a man who loves you would rarely feel less attracted to you unless he has some interest in some woman out there. However, you might need to check on the overall health of the relationship to ensure that there is nothing that inhibits romance, for example, poor communication and underlying issues. Love and affection should be directed to you alone if your relationship is monogamous. Hence, a decline of romance might be a major red flag or one of the signs that he loves the other woman.

The last thing a woman needs to hear from a man is excuses for his unavailability or frequent lateness. We all are busy from time to time and can get late on different occasions due to our commitments.

However, if your man is always late or unavailable giving lame excuses for this, then know that there is a likelihood that there might be another woman warming up his heart.

Notably, if he has a woman he is checking on out there, this might explain why he has been quite unavailable and late for occasions giving lame and unsubstantiated reasons. If he always sounds panicked when he explains his lateness or unavailability, then you can be sure that he has something hidden, probably a fling.

Related: Does he miss me at all

Have you tried picking up your man's phone to take a selfie or play a favorite game in it? What was his reaction? Well, a guy with a clear conscience would never panic seeing you pick up his phone for legitimate reasons like such. After all, he has nothing to hide.

There is nothing wrong with your man preferring their privacy for valid boundary reasons. However, if he looks quite disturbed by the idea of you handling his phone, this might be a red light that there is something your man is doing behind your back. Probably, he is hiding his call log, messages, or sexy photos of the other woman.

Women rarely express their opinions about their partners' dressing styles. However, if your man is in love more often than not he will appear more attractive to the object driving towards his affection. In this case, his fling might have complimented some of his outfits worn around her. As a result, your man might have been motivated to wear more of what the other woman in his life likes.

Probably he wore t-shirts and jeans but has switched his wardrobe to button-downs and stylish khakis. When it comes to hairstyles, colognes, and other outward appearances that have been on the check and trendy recently, you man might be trying to match the other woman's taste for preppy looks.

However, before you get carried away, remember that not every single change in your man's personal style indicates that he is having an affair. There's still a chance that your man was just thinking about redefining himself by upgrading to better looks and a classic wardrobe.

Nevertheless, if his new looks are out of character or there are other signs that he is in love with another woman, then you may have been leading suspicion to the truth.

Related: How to make a man miss you like crazy

6. His Close Mates Acts Strange Towards You Nowadays

No one knows better about your relationship than the friends, especially when you come first not in his life. Owing to our social nature, there is a high likelihood that your man has shared with his friends any emotional or physical affair while leaving you in the dark.

At some point, his close friends might even know who the other woman might be. After all, they might have carpooled on a road trip, or taken shots at that nightclub as a group.

His friends are loyal to your man hence they will barely tell you verbally of what is happening. However, their body language at times can betray them especially when they fill the aura with suspense and guilt. The friends might not help the feeling of having them safeguard their loyalty to your man while they wish to spare you the pain of knowing the truth too.

Hence, if a friend of your man to who you used to be quite close starts acting awkward around you, then stay woke and warned. Also, friends who become quite sympathetic and gentle without a reasonable cause might communicate much about the status of your relationship.

Therefore, there is a need to monitor the health of your interactions with the mutual or close friends you are quite free with. While they may not share directly what they know, their behavior around you might speak volumes about your husband's conduct in your absence.

We are all entitled to some level of privacy in both friendships and relationships. And true to the word, keeping some boundaries and reasonable privacy levels remains essential and healthy for a relationship. However, too much privacy needs from your lover might signify a change in where his love is channeled.

While boundaries and privacy need to be kept, a new obsessive need on his part means that there is much going on behind your back. In most cases, you might have fallen out of favor of having another woman replace you in his heart.

Hence, if your man is lately refusing to spend quality time with you outdoors, taking calls in a locked study room, or overprotective over his devices, then he might be trying to hide his fling from you.

8. He Mentions the Other Woman's Name

You might discredit this sign at first-after all you find no solid reason as to why he might mention the name of his fling. However, love for someone will more often than not have you think of these people and mention them in your conversations.

Your man will not introduce her in the conversation as the woman she has a crush on or loves but will do so in a neutral way that you can barely decode any chemistry between them. In most cases, your man will bring them on in your conversation while talking about his day-to-day experiences at work or outdoors.

Her mention might not awake the sense in you to decode that some woman out there is making your man happy in absence. In fact, your man stages her as a harmless but great coworker, friend, or group member.

Later on, you will piece up all the stories given to see the real plot or path of love and affection between the two. Notably, of all the signs that he loves the other woman, this might be quite hidden yet a significant red flag.

Read next: Signs he wants to make love with you

While some men might have a fling, a woman's great worry is having his man fall in love with the other woman. It might hurt but this is quite a trend in recent days having people fall out of love without a fuss or worrying about their significant others.

The only cure to this is safeguarding your emotions and probably moving out of the relationship if you are sure the red flags justify he is cheating and is in love with the other woman. However, you might need to be sure before making such a decision, hence seek to identify several signs that he loves another woman before walking out of that door.