×
You are here: Home / Love & Relationship / How to find out if a guy likes you

Guys, most of the time, are not all that complicated. This does not mean that they are all the stereotypical pigs who only want to have sex with whoever they can, whenever they can, or who only really care about cars, beer, pizza, and poker; it just means that it isn’t really that difficult to figure out if a guy likes you.

Related: How to Tell If a Guy Likes You But is Hiding It

If a guy does like you, he will almost always be obvious about it; whether or not he is smooth or awkward about it, he isn’t going to hide it, and it should be very easy to tell. Still, sometimes we are unsure of ourselves, and still question whether or not a guy likes it even when it is written all over him, and even though everyone else around us can tell easily. 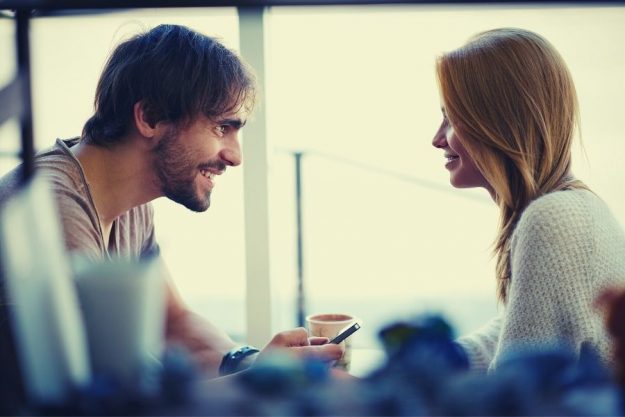 Obviously, if you’re not sure if a guy likes you or not, the easiest thing to do would simply be to ask him; or what would be even better, is if you like him you should just tell him – that way he will be more likely to tell you back instead of hiding the fact he likes you from shyness, or because he doesn’t think you like him back. Understandably, though, this is sometimes a thing easier said than done.

Related: Does your crush likes you or not

What’s more is: you may not be trying to find out if he likes you because you like him, but because you don’t, and maybe you want to get him out of your hair. In this case, asking him could be much more awkward, and even humiliating for him if you bluntly tell him that you don’t like him back. In this case, if you are not ready to take the plunge and just tell him either that you like him to find out how he feels, or if you are trying to get rid of him but don’t want to hurt his feelings too much, here are a few pointers to that might help you to figure out if he likes you or not:

1.) He’s always around: At work, or at school, or within your group of friends, he seems to constantly be around you. He appears all of a sudden, seemingly from nowhere, to share a joke, compliment you, offer you a pretzel, or whatever. In other words: you just can’t seem to get rid of him - this could be good or bad depending on the way you feel about him.

2.) He acts like you: Sometimes friends who really like one another can pick up habits, mannerisms, and ways of laughing from one another. Ordinarily, this can be a very interesting economy of qualities passed on among good friends; but, when it happens between men and women it can be weird. If he suddenly starts talking to you about the Bachelorette or complains about his gross little brother who lives for Black Sabbath, something is probably up. Still, this could be sweet if you like him (as long as he doesn’t keep it up once you’re dating).

3.) When a guy playfully hits or touches you: Women, of course, are guilty of this one too; namely, touching someone they like on the knee or arm unnecessarily, when they make a joke for example. Men, on the other hand, can try to make this more ‘manly’ by turning it into a playful hit or punch on the shoulder. This can be OK, if you’re into the guy too, but it can also be very obnoxious if you aren’t (and if the guy is nervous or awkward and does it too hard, it can really hurt too!)

4.) Eye contact or body language: If he is constantly looking at you, or trying to make eye contact with you, even when you are not directly with him when he is on the other side of the room, then something is probably up. If just in general, his energy and attention seem to be always focused towards you, he either likes you or is fixated on some horrible revenge. This same thing can come out through his body language: if he is always leaning towards you, or leaning in close to talk when he doesn’t need to, then the same probably applies. Also, look to see if his shoulders and pelvis are pointed towards you when he sits.

5.) He is nervous, or talks too much about himself, or acts macho: If he shows any obvious signs of nervousness around you, like sweating, shaking, saying stupid things, having trouble talking, or just generally acting weird, it probably means he likes you. Another way this nervousness can show itself is by talking too much, or by acting big. If he is constantly talking about how great he is, about all the things he can do, etc., etc., he may be making up for his nervousness by going over the top about himself. This could also cause him to act unnecessarily macho; lifting heavy things that don’t need lifting, or finding excuses to hold his arm in just such a way that he can show off his bicep.

6.) He shows an interest in your interests, or compliments you, or teases you: If he seems to be making an effort to ask about what you are interested in, what movies, books, or music really get you excited, and especially if he tries to convince you that he is really interested in those things too (even though it’s pretty obvious that he isn’t) then he probably likes you. Also, if he is always complimenting you, especially if he does it at strange times or in strange situations (“Wow, I had no idea you were so good at stapling!”), this is also a pretty obvious sign that he likes you. Another thing he could do, which can tend to get annoying, and again, if he is nervous or awkward can be insulting, is he might playfully tease or insult you.

7.) He doesn’t act this way with all women: This one is important because many of the signs listed above can happen even if the guy doesn’t like you if he is simply a very outgoing, friendly, enthusiastic, nervous, or flirty person. Pay attention to the way he acts around other people (especially other women). If he is constantly complimenting, playfully punching, following around, or acting macho in front of every woman, then he probably isn’t really that interested in you (and he should probably be locked up). On the other hand, if you seem him acting basically normally, i.e. calm, sober, and indifferent around other women, then you can be pretty sure that there’s something special about you to him.

8.) Pay attention to his friends: If he likes you, his friends will almost definitely know; and, if they do know, they will almost just as definitely not be tactful or delicate about it with him when you are around. Pay attention: when you walk into the room, do his friends give him the teasing look that says: “Oh! Look! It’s her!” Do they push him in your direction, forcing him to come up and talk to you, or are they unusually friendly or familiar with them, like they’ve heard all about you (even though you don’t really know who they are). These are all pretty clear signs that he likes you, and that his friends know about it.

Like we said above: it should be obvious, if not painfully so, that a guy likes you; you shouldn’t even need to go over this list explicitly – if I guy likes you, it is usually written all over him. Still, sometimes when it is ourselves in the situation, we are somehow blinded to the glaringly obvious signs that are so apparent to anyone else without going over any sort of checklist. If you find yourself clueless in this way, then this list might help you out as a back-up.

The question now remains, what will you do once you’ve figured out that he likes you? I suppose this all depends on whether or not the feeling is mutual. If you do like him back, though, for Pete’s sake don’t circle around each other acting like idiots for months, driving everybody crazy. Just tell him, if he doesn’t have the guts to do it himself, and get all the painful and ridiculous courting rituals over with.

On the other hand, if the feeling is not mutual, and you want to get rid of the guy, then I’m honestly not sure what to say. Whatever you do, be delicate about it, and at all costs don’t give him the bad news in front of other people (or on the telephone, and least of all not on Facebook). Just keep in mind: as much as it sucks to be told by someone you like that the feeling isn’t mutual, it is probably worse, in the long run, to be left thinking there is a chance over a long period of time when there isn’t one.